It was a typically cold, windy morning at the Hackney Marshes on Saturday, as two mid-table clubs met in a game that would have boosted the winning side up the U13/14s Grey League table. As both sides continue to find some consistent form.

The Oranges kicked-off looking the brighter team, with a flurry of attacks down the right flank. Little time had passed when Leytonstone's keeper was forced into the action, making some key saves early on.

Leytonstone fought back, probing the right wing which seemed pivotal to their attacking success as they found themselves through on goal, missing the target early on.

Early indications signalled that the wind would play an integral part, tossing the ball off target as the midfielders looked to find their attackers, and creating issues for the defenders.

Half way through the first half, and Leytonstone found their way through on goal with their robust midfielder number 27 slotting through his striker down the centre with only the keeper to beat, and then scoring only to be found questionably offside.

But Leytonstone continued, attacking through the centre once again and leaving the Oranges exposed at the back. The heavily involved number 27 proceeded to lob the keeper in a beautifully crafted goal to break the deadlock and put Leytonstone 1-0 ahead.

However, Oranges struck back, as their keeper lifted the ball towards his midfielder who in turn found his controversially onside striker, who finished the play with a composed finish to tie the game at 1-1.

Half-time arrived after an exhilarating 30 minutes, with Leytonstone arguably in control of the match up, but that was all about to change.

Second-half arrived, and the Oranges came out resurgent and ready to turn around the game, attacking down the left-side, finding the striker clean through before rolling the ball slowly past the exposed keeper to take the lead.

Moments later, a corner-kick arrived with the taker steering the ball towards the keeper who mishandled the ball into his own net, taking the Oranges 3-1 ahead.

Shell-shocked and bewildered, the initial leaders crumbled, as the keeper became involved in a back-pass that led to a free-kick.

This was quickly taken by the Oranges who placed the ball into the net, making it 4-1.

But the Yellows had fight: number 27 lead the attack with an inspirational solo run which led to the defender bringing him down in the box. His teammate dispatched the ball into the net from the spot.

Back again down the other end, Oranges found themselves through on goal, striking at the keeper from close range with a shot that comically ricocheted off the keeper back to the striker and ultimately into the net, 5-2 Oranges.

Full time, and the Oranges left with the three points in a game that was centred on taking chances, and that’s exactly what they did, with an emphatic victory. 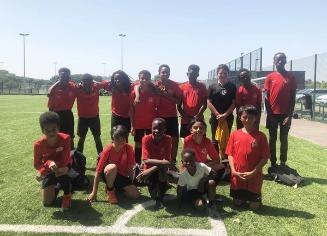