An impressive performance from FDSFL Division 1 outfit VFC Villagereal saw them win the prestigious Hampshire FA Sunday Veterans Cup at the Alton (Bass) Sports Ground.
Opponents AFC Portchester who play in the Meon Valley Sunday Veterans League were caught cold when Villagereal striker Mark Frampton opened the scoring in the 2nd minute. Midway through the half Portchester levelled the scores and then almost took the lead, hitting the post after a fluent build up.

In an eventful first half both teams battled to control midfield as the play swung from end to end but 5 minutes before the interval the lofty Matt Everard rose at the back post six yards out to head a fine cross, the ball flew into the top corner to regain the Farnborough outfits advantage.

The second half saw Villagereal tighten their grip on the match creating frequent opportunities and limiting their opponents to a handful of wayward long distance shots. VFC were making good use of their height advantage at dead ball situations and it was no great surprise when they extended their lead midway through the half with Frampton notching his 2nd, nodding in a close range unchallenged header from a corner. Portchester had put in a shift but were resigned to their fate and Villagereal saw out the remainder of the game comfortably. 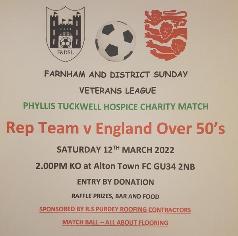 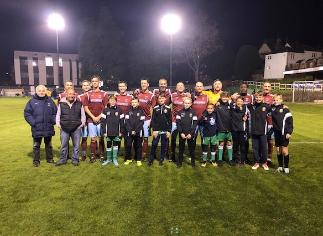