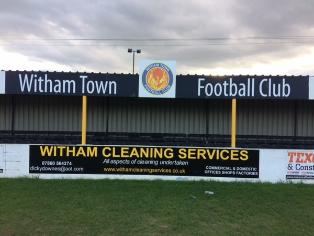 Within 2 minutes of the kick off Southminster went ahead when Connor Harris shot from outside of the box seemed to deceive the Mundon keeper and went into the top corner. Having taken an early advantage Southminster went hunting for a second. The pace of Kevin Troy down the left was causing some anxiety to the Mundon Vics back four, as was the height of Jake Yeldham, who headed over after 15 minutes when well place.

In the 20th minute Southminster doubled their lead when Yeldham thundered a shot which hit the underside of the bar and nestled in the back of the net.

Mundon Vics rallied at this point. A free kick wide on the right was tipped over by the Southminster keeper, and Aaron Stevenson Roberts saw a header cleared off the line, then on 30 minutes saw his free kick drift wide of the upright. With 10 minutes of the half remaining Ricky Hains broke clear for Mundon Vics, he was impeded by the Southminster defender but with the Referee trying to play advantage was allowed to continue and saw andhis shot drift wide of the far post. The Referee however decided to bring play back and from the free kick on the edge of the box a wonder strike by Aaron Stevenson Roberts saw the Vics halve the deficit.

Within 10 minutes of the restart Mundon Vics were level.
A mirror of the first half inside 2 minutes Aaron Stevenson Roberts scored his and Vics second, then following a handball in the box, Roberts completed his hat trick, only after his spot kick was saved but was able to hammer home the rebound.

Vics looked the more dangerous at this point and applied pressure on the Southminster goal. Hains dangerous cross failed to find any Vics player in the box.

As the half wore on both Southminster looked the more likely to snatch victory, and the Vics keeper saved well from a deflected effort.

As we saw at the both of each halves inside a minute of the restart Southminster took the initiative when Connor Harris scored again. The game was all but over 10 minutes later when Jake Bastone shot from the edge of the box into the corner of the net to give Southminster what turned out to be an unassailable 2 two advantage.

Tiredness set in and both teams struggled through the next 20 minutes leaving Southminster St. Leonards F.C. to lift the trophy after a gruelling encounter