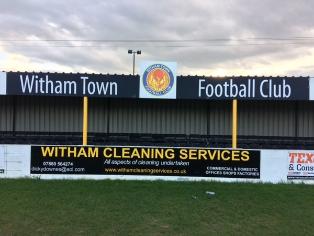 Emeronians F.C. completed the League and Cup double after beating Mayland Village F.C. in a close game, which was decided in extra time.

The team from Hainault dominated the first half and believed they had taken the lead after 7 minutes when a cross from George Fosh found Bill Nicholls who headed against the underside of the bar, the match officials were well placed to see the ball had not crossed the line.

Bradley Powell in the Mayland goal was called on to save smartly from Nicholls. Emeronians continued to press and on 25 minutes took the lead when a corner from the left was drilled home by Charlie Nicholls from the edge of the box.

The second half was a totally different affair as Mayland came out much the stronger and Emeronians lost control of the game. William Dowzall headed over on 55 minutes missing a glorious opportunity to equalise.

As the half wore on Mayland placed more and more pressure on the Emeronians goal but despite their possession failed to create an opportunity worthy of levelling up the game.

As the game edged into added time, Dowzall was clipped in the box which saw the Referee point to the spot. Up stepped Luke Wilkins to hammer home. There was just enough time for Jordan Eves to almost snatch victory for Mayland as he saw his effort deflected wide

For the third game in succession the Cup Final went to extra time.
Emeronians came out much the stronger of the two sides, and in the first period of extra time went back in front. A cross from skipper Ted Stuckey found Bill Nicholls in space who slotted home. Kieron Sibley almost made it three on 105 minutes when his header struck the Mayland Village F.C. cross bar.

Emeronians put the game to bed in the second period of extra time, an error from the Mayland keeper allowed Charlie Nicholls to score his second and he then went on to complete his hat trick 5 minutes before time when a free kick seemed to deceive the Mayland keeper and the ball found its way into the far corner

The full time result did not reflect the commitment of Mayland Village who fought hard but having conceded in extra time this seemed to knock the stuffing out of them, but they should be proud of their contribution to a good game, with Emeronians lifting the Cup in their first season in the competition