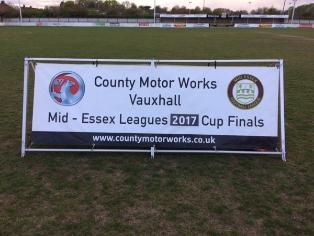 CT66 F.C. lifted the Premier Division League cup for the first time in a hard fought game on Good Friday.

Both teams took time to acclimatise to the conditions, pitch was hard and a strong breeze meant the game became a tight affair, with limited opportunities.

It took over 25 minutes before there was a meaningful effort on goal. CT66 broke quickly, but Tom Berry’s effort went harmlessly wide. It was the team from Canvey that more likely to score and Ben Britnal headed over from a corner.

It took a defensive error from CT66 to allow Braintree their first sight of goal. A tame back pass allowed the dangerous Andrew Fennell to bare down on goal Thorogood was quick off his line to smother only for Ayubnn to hit his follow up high and wide.

On 30 minutes CT66 secured the lead when the ball found its way to Darren Godfrey who was never going to miss as he struck the ball into the far corner.
Braintree responded immediately when Fennell’s shot from the edge of the box was arrowing into the corner of the net only for Thorogood to push wide.
In added time Britnal saw a header clip the top of the Braintree cross bar.

A keeper error right at the start of the second half almost gifted Braintree and equaliser, but somehow CT66 defence scrambled the ball to safety.
Braintree continued to apply the pressure and on 65 minutes a hopeful ball into the CT66 penalty area by Dean Bowman seemed to deceive the Thorogood in the CT goal and he had to parry the ball wide.

On 70 minutes Fennell broke clear of the CT66 defence only for Thorogood to stand firm and push the effort away to safety.

As the half wore on CT66 gained control of the game but despite their possession they failed to create anything meaningful in terms of chances.
Both sides cancelled each other out and CT66 held on to lift the trophy after 90 minutes

Credit to both sides and to the three Match Officials who all contributed to an entertaining game.