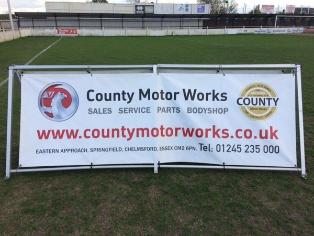 Royal Oak dominated the first half but only had a single goal to show from the wealth of possession they enjoyed in the first 45 minutes. Inside 2 minutes the team from Basildon showed their intent when Scott Hawes shot over from an early free kick.

Royal Oak again went close inside 15 minutes again from a free kick on this occasion Brad Harvey shot wide of the upright. During defended bravely but struggled to get out of their half as Royal Oak pegged them in. Aaron Tait was next to test the During keeper who saved well from his header, then Tait saw a 38 minute header cleared off the line.

Durning finally ventured into the Royal Oak half but from a mis directed free kick Royal Oak broke quickly and Tait was able to outpace the Durning defenders to score just before half time.

The second half was an entirely different game as Durning went on the hunt for an equaliser.

Liam Keane saw a header go tamely over the bar from a corner. But then a hopeful cross from the right appeared to confuse the Royal Oak defence and allowed Durning skipper Lawrence Mudford to head the ball goalwards, the ball finding its way into the bottom corner.

Royal Oak tried the restore their lead when a Pithers free kick from some 40 yards deceived the Durning keeper who managed to tip the ball over.

As the half wore on Durning gained the upper hand and finished much the stronger of the two sides. Mudford was denied by the woodwork from a defected shot, then on 81 minutes Steve Goody’s header hit the bar.
Neither side managed to secure the all important winner which meant for the second week running the game went into an extra 30 minutes

Chances were few and far between in extra time, and the game seemed to be heading towards a penalty shoot out.

Durning were reduced to 10 men when Billy Bilton saw red.

However in the 110th minute of the game a corner from the right saw Steve Goody unmarked in the box to score and so secure the trophy for Durning F.C.