Friday night: FA Vase action saw Chippenham Park host local Wiltshire rivals Bradford Town. In a close fought match in front of 169 spectators the tie finished 1-1 after 90 minutes, but it was Bradford Town who left Hardenhuish Park the happier after Mark Wall netted a winner deep into extra time.
Bridport: FA Vase action saw The Bees make their way to north Wiltshire to face Hellenic League Highworth Town. After a goal-less first half it was the Worthians who broke the deadlock mid way through the second half with a goal from TJ Bohane. Bridport pushed forward for the equaliser and struck the woodwork three times before Highworth sealed the tie with two late goals in the 89th and 90th minute.
Odd Down: Visitors Hallen put up a fight at the Lew Hill Memorial Ground in this FA Vase tie by leading 2-1 at the half time break. However Odd Down equalised in the second period before Ibrahim Sarr popped up with a rasper of a shot from over 20 yards to seal victory for the home club by 3-2.
Shepton Mallet: Another all Toolstation FA Vase tie saw Division One Welton Rovers visit Old Wells Road. Welton pushed their Premier Division opponents all the way but it was a Jordan Townsley goal just before the break which settled the tie 1-0 for the home club.
FA Vase: Melksham Town and Slimbridge will have to do it all over again on Tuesday evening after the tie finished 2-2 after extra time at the Conigre. These two clubs will be joined by Buckland Athletic and Bristol Manor Farm whose match was postponed due to a waterlogged pitch as well as Bradford Town, Odd Down and Shepton Mallet in Mondays 3rd round draw. The last 64 teams see a guaranteed four clubs representing the Western League in the competition.
Bitton: A 5-1 victory in front of 108 spectators at the Rapid Solicitors Ground over local rivals Cadbury Heath saw Bitton move into second place in the Premier Division table.
Gillingham Town: A 3-1 victory at home to Street has seen the Dorset clubs recent fine league take them off the bottom of the Premier Division table. Replacing them is Bishop Sutton who went down 0-4 at home to Sherborne Town.
Wincanton Town: The Winkys are losing pace with the top teams in Division One after going down to a 2-1 defeat at home to Cribbs. Cribbs now tail Wincanton in 4th place on goal difference.
Barnstaple Town: A 4-1 home victory over Wells City in front of a crowd of 128 keeps the Barum at the top of Division One. A staggering 78 league goals have so far been scored by the club in this campaign.
Ashton & Backwell United: A 3-3 draw away to Chard Town at Zembard Lane has moved the club into second position. Chard led 3-1 when Ashton had both Brendan Abood and Connor Flicker both dismissed but somehow scored two late goals with nine men to salvage a draw. 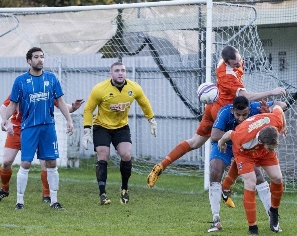 The official website for the Toolstation Western Football League.