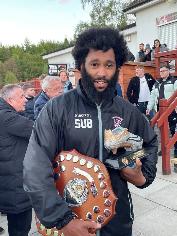 The first of four League Cup Finals was played on Tuesday evening at the Stafflex Arena, Storthes Hall when Laund Hill lifted the Groom Cup with a 3-2 victory over Kirkburton.

The photo below shows the first ever Lady President of the Huddersfield & District Association Football League, Mrs Margaret Whitaker with the two teams and match officials prior to kick-off.


It was Kirkburton who struck first with skipper Henry Philpott putting the reds ahead in the first half with a determined header that gave the Laund Hill keeper no chance. Daniel Lockwood made it 2-0 with a well struck shot from open play midway through the second period, to give Kirkburton what appeared to be a commanding lead. However, Laund Hill staged a late rally and goals from Jimmy Knowles and Craig Burns levelled the score line to set up a nail-biting finish. Second half substitute and man of the match Declan James rifled home the winner from inside the box with only minutes remaining.

The match was well-managed by the referee Tom Mallon, assisted by Shakeel Allad and Joe Wink-Simmonds.

The man of the match was “super sub” Declan James who was presented with the Geoff Earnshaw Shield.