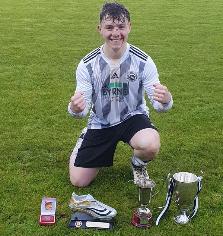 Richardson Cup Final
Linthwaite Athletic Reserves won their first Richardson Cup final beating Deighton Reserves 2-0.
The game started with both sides determined to put their mark on the game and referee Mick Robertson had to have words with a couple of players early on as tempers threatened to boil over.
A further couple of meaty tackles resulted in Linthwaites’ number 9 receiving a yellow card and a harsh warning. Deighton were forced to make an early change after one such challenge and a Linthwaite player suffered facial injuries including a suspected broken nose after another challenge.
Both teams were trying to break quickly and passes were going astray on a wide pitch.
After 23 minutes Linthwaite worked their way up the pitch and a deep cross in to the six-yard box was met by winger Nathan Kavanagh whose firmly struck header opened the scoring. Kavanagh needed medical treatment shortly as he was the player who had facial injuries from an earlier challenge.
After a quick clean up, Kavanagh resumed and continued to cause Deighton problems for the rest of the first half.
After the break Linthwaite continued to press but Deightons’ defence stood firm. Deighton midfielder Paul Pyke tried to get his team back in to the game driving his team forward in the pouring rain.
Linthwaite were having the better chances and looked more likely to add to their score.
In the 62nd minute a speculative shot from a Linthwaite forward was tipped around the post by the Deighton keeper for a corner. From the corner the ball dropped to Jamie Byrne with his back to the goal, brought the ball under control and juggled it before striking a low shot through a crowded six -yard box for Linthwaites’ second.
Following a quick Linthwaite counter-attack a Deighton defender was booked for blocking and Deighton player-coach Pyke talked himself in to a 10 minute spell in the sin bin.
In the 75th minute Deighton had their best chance of the game when their number 5 headed a corner narrowly wide.
The match referee was Mick Robertson ably assisted by Craig Smith and Paul Milosevic.
The Brian Handley Trophy for man of the match was awarded to Nathan Kavanagh of Linthwaite.