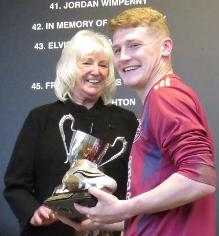 District League Report Thursday 27th May 2021
Berry Brow won the Barlow Cup Final for the first time in their history beating Newsome 2-1 at the Skye Direct Stadium home of Golcar United.
The game started quietly as both teams weighed each other up and Berry Brow soon seized the initiative creating several half chances without success.
After 15 minutes, Berry Brow worked the ball out wide and a deep cross to the edge of the box was hit by Thomas Oakes on the volley into the roof of the net for the opening goal.
Berry Brow continued to press and kept Newsome struggling to mount any form of attack. The Newsome keeper was kept busy as Berry Brow tried to maintain their advantage.
In the 40th minute Berry Brow were awarded a free kick about 10 yards outside of the penalty area. Joe Brennan stepped up and struck a brilliant shot in o the bottom corner of the Newsome net.
The second half was much more even as Newsome made changes to try and get back into the game. The introduction of a couple of pacey Newsome forwards gave the Berry Brow defence a bit of work to do. With time added on being played Newsome got a late consolation when a Kyle Walton free kick was deflected past the Berry Brow goalkeeper.
The game was well managed by Referee Mick Denton and his assistants Michael Coles, Gareth Thomas and Umar Ahmed.
The Frank Beaumont Trophy for man of the match was awarded to Joe Brennan from Berry Brow.