Chesham Utd do the Double 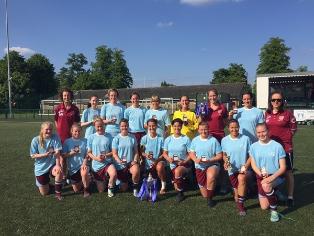 The second game on Sunday 20th May saw Premier Division champs Chesham Utd, drawn as the away team to Division One South champs AFC Bournemouth. Either way was going to result in a Double celebration but with Chesham unbeaten in 16 league games and their Cup rounds they definitely started as the favourites.

Chesham got out of the blocks quickly despite the soaring temps at Alton FC and with 8 mins gone Gemma Fraser gave them a 1-0 lead. The action ebbed and flowed for the next 20 mins; Chesham GK Lucia Masella was called into action a couple of times and on 33 mins she got more of the player than the ball and AFC Bournemouth earned a penalty. Masella was given a yellow but stayed on the pitch to face the pen. AFC Bournemouth's Chloe Tape looked to have slotted in to the bottom right hand corner but it hit the foot of the post and bounced wide to safety to be cleared.

Both teams had other half chances, but the first half ended with Chesham 1-0 up.

With pitch side temps probably in the region of 30 degrees, the second half got started again at just before 4pm and Gemma Fraser again did the business in front of goal, her pace making life difficult for the Cherries defenders. She slotted home on 55' to bring Chesham 2-0 up.

The Cherries rallied again and on 62' Masella was called into a reaction save from close range and then 5 minutes after might count herself lucky after going to ground and clipping a Cherries striker's ankle rather than the ball. The striker kept her feet and the ball but off balance and wide wasn't able to make the cut back to score. Match of the Day would have debated that one long and hard!

The momentum swung back to Chesham after that moment and Fraser popped up 3 minutes later to finish off her hat-trick, secure her player of the match award, and get the match ball with the score at 3-0.

Despite the big mountain to climb, AFCB kept playing and on 78' Chloe Tape made up for her missed pen with a goal to keep hopes alive for the Cherries. Sadly there was to be no further goals for them and the game finished with Chesham Utd 3-1 to the good.

Both teams showed off their potential and we wish Chesham Utd the best of luck next season in the FA Women's Premier league, and to AFC Bournemouth who are promoted in their first season to the Premier Division.