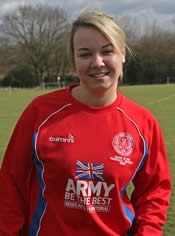 Sian Houghton of Aldershot Town who bagged a brace against Slough on Sunday.

The results are now in

Apologies for the delay but the Secretary has been on holiday so results are a week late.

H&W maintain their championship form with a double header win over Shanklin - scores were 3-0 then 2-0.

Bracknell keep up the pressure on the following pack with a 3-0 win over Henley, whilst Slough suffered a heavy defeat at the hands of Aldershot, who ran out 5-0 winners.

The Wanderers - Wycombe and MK - shared a 1-1 draw, whilst the Southampton Derby was abandoned after 51 minutes following injury to the Saints keeper and an outfield Women's keeper. The score at the time was 1-0 to Saints and the decision on that game will await the committee review on 24 March.

The Saints keeper Chaz Poulton has suffered a broken leg requiring an operation to pin it back into position. The League wish her a speedy recovery.

In the first division, Reading Ladies were minutes away from a 2-2 draw at Chesham Res, only to have a penalty given against them which was converted to leave them with no points from the game.