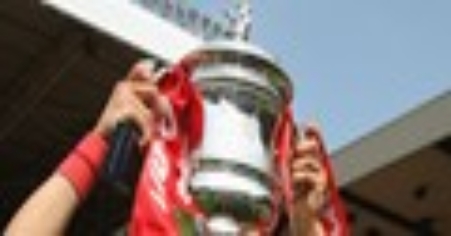 Stars from Arsenal and Everton visited MK Dons stadiummk as they prepared for their appearance at Sundays FA Womens Cup Final.

The teams, who will face each other in the showpiece final on Sunday [1 June], were welcomed to the stadium by MK Dons chairman Pete Winkelman.

Arsenal will look to lift the prestigious trophy for the second season in a row and for the 13th time in the clubs history - more than any other club. Defender Alex Scott, who has won the FA Womens Cup eight times, says this game is just as exciting as her first final.

She said: It doesnt matter how many times you get to the Final, its always amazing to be there and the excitement and nerves are just the same.

We know how much it means to win it and what that feels like, thats whats driving the team on. This is a fantastic stadium and itll be a brilliant day, and I cant wait to walk out of that tunnel next week.

Everton will be hoping for a repeat of their last appearance in the Cup Final, when they beat Arsenal 3-2 after extra time in 2010. Jody Handley, who captained Everton to that win, said: Being here alongside the Arsenal girls today in a stadium like this really brings home just what a huge game the FA Womens Cup Final is.

We really want to win the trophy and being here today has made me even more excited for the game. I know there are a lot of Everton fans travelling down to the game and Im sure theyll have a great day out in Milton Keynes.

Fellow Blue, Faye Bryson, also visited the stadium ahead of her sides appearance in the FA Girls Youth Cup Final against Merseyside rivals Liverpool. The match will precede the womens final, kicking off at 1pm, and tickets are valid for both games.

She said: Its really exciting to be in a Cup Final and even more exciting that its against Liverpool. Its the biggest stadium most of the team have ever played in, and I cant wait for kick-off.

X Factor finalist Luke Friend will provide entertainment before the match performing live on the pitch, while local soprano Emily Haig will sing the national anthem.

Luke Friend said: I can't wait to perform at the FA Womens Cup Final. Ive always been a massive fan of football and have a huge respect for anybody who takes part in this amazing sport.

The fact is a cup final makes it even more exciting. I'm sure there will be a massive buzz around the stadium.

Before the match fans are invited to visit the free FA Junior Fanzone, brought by Continental Tyres, which will be open from 12pm directly outside stadiummk.

The fun Fanzone includes football and lifestyle activities, aimed at all the family. Children will be able to test their football skills in a speed cage and at an inflatable target shoot, while older fans can check their reflexes on a special batak board. Charlotte Lade, one of the worlds leading professional football freestylers, will entertain fans with football tricks and skills.