Please find below a report for the recent CDSFL AGM.

Having had to curtail the 2019/20 playing season back in March due to the Coronavirus outbreak, members of the shoestring-chargrilled sponsored Chippenham & District Sunday Football League, followed FA advice on Wednesday evening when they held their AGM and Presentation evening via a Zoom meeting. Unlike any usual season where nearly 30 awards and cash prizes are handed out on the night, this year saw only four presentations made, along with the Best Club Secretary and Gordon Blatchford winners there were also special awards for both Vivienne Gardener and John Haigh.

First Class delivery for Secretary Green
Wednesday Warriors FC may have only joined the League in 2018, but after just two seasons the club founder Stuart Green has been rewarded for his efforts off the field, which has seen him rewarded with this seasons Secretary of the year award.Green who played for FC St Georges before the team folded towards the latter part of the 2017/18 season decided to put enter his own team into the league and although the results may not have gone their way in their first campaign, they faired a lot better in their second season.Green whose day job sees him delivering post around Warminster, delivered results on the pitch with 4 league wins, but it was for his off-field contribution that he has been recognized. Like in previous seasons it was another tough decision for the choice of top secretary, as the league had a number of candidates to choose from, but in the end, it was a majority vote that saw him pick up the well-deserved accolade.There is no doubt that his efforts since joining the League has made Green, whose paperwork is exceptional, his communication with League officer’s is outstanding and his commitment to his Club and the League is something to admire, makes him the latest worthy winner of the award that this year has been sponsored by Manny Schneider. As well as receiving a memento, Green will also pick up £75.

Esoof rewarded with Blatchford Award
Cader Esoof, has became the latest recipient of the Gordon Blatchford award which is presented annually by the league to an individual, or club who the league believe has gone that extra bit to give something back to grass roots football and whom they reward for their efforts.The league invite nominations for the accolade which was first won by Referee, Dick Colman in 1983, this year saw 5 people nominated, but with 2 nominations and taking the others into consideration the committee voted unanimously to that Trowbridge based Esoof would be a deserved recipient of this year’s award. Esoof has been around the local football scene for many years and he is a massive follower of grass roots football where no doubt he has made many friends over the years. He was introduced to the league by the then League Development Officer, Mike Rogers back in 2017 when he turned up at the WG Parr Trophy, between Treasurer, Doreen Rugg and chairman Andy Hillier, they convinced him to join the committee.Since then, Esoof has played a big part in the league, not just as a committee member, where his input and reasoned approach to all things make him a huge asset. Prior to him joining the league he could be seen at matches with his trusted camera/s, snapping away, this was later to prove a great help to the league. As the local press decided to stop sending photographers to matches, Esoof proved invaluable as he would go out in all conditions, rain, wind, snow and the occasional sunshine to take photos, which in turn were used by the papers. Cader Esoof’s commitment to the league is second to none and like the many who have gone before him he is a deserved winner of the Gordon Blatchford Shield which this season is sponsored by league Chairman, Andy Hillier. Along with his memento he will also pick up £75.

CONS' on the search for more players

GLOUCESTER CONSERVATIVE FC, who will be making their debut in the Chippenham & District Sunday League, are looking for a new players for the 2018/19 season. 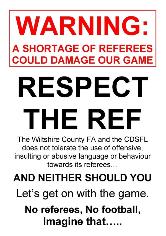 WARNING: A SHORTAGE OF REFEREES COULD DAMAGE OUR GAME

A new version of the CDSFL Registration Form is now available to download from this site.