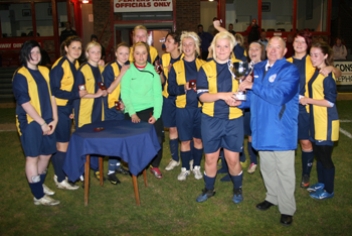 Malet Lambert bowed out of the League by adding the League Cup to the Div 1 Championship title.

Malet had the better of things against Hunmanby at Queensgate. Establishing a 4 goal advantage midway through the second period.
Hunmanby, however, were a plucky side who did not let their heads drop and worked hard throughout. Their reward came in the closing stages when they notched 2 goals. They pressed for a third, which would have set up a grandstand finish, but they could not break down the resolute Malet defense again and the Champion's took the trophy.
Hunmanby's Sammi Lee was awarded the Player of the Match and Malet's Carla Green notched a goal which left her 2 goals in front of Hunmanby's Josie fullard to claim the League's Leading Goal Scorer Award. Green had gone into the game with a goal advantage, having grabbed a late winner in the Championship Play-Off.

Information documents for Team Secretaries can be downloaded from here

A variety of information and forms can be downloaded here. The information is updated as details change and therefore the site should be consulted regularly.

Goal keeper wanted at cforce united women must be flexible and able to attend training and games .. Please email misslauramatson123@gmail.com or txt loz 07731339952 for further details .. thank you