Gilberdyke Ladies played their very first competative match against an impressive North Ferriby side.
The home side found themselves having to adjust very quickly to the demands of a competative match, and found themselves one goal down within the first 5 minutes. However, as time went on the home sides confidence grew and grew. North Ferriby, on the other hand, played with confidence from the start and showed that they will be a very capable team in the upcoming season.
The away team found themselves 3 goals ahead halfway through the first half, with some fantastic play coming from the front players. However, Gilberdyke battled on and found themsleves getting back into the game and putting the away team under pressure for longer periods. Janice Lawalor played soem wonderful football down the right wing and Sara Hall was fiersome at left-back. It wasn't long before Gilberdyke got the goal they deserved. After some great passing play along the left wing, Ashley Timm found an opening and finished well.
At half time the score 1 - 4 .
The second half started much brighter for Gilberdyke. After some formation changes and tactics adjustments, the home side began putting a lot of pressure on North Ferriby. However, the North Ferriby keeper was on good form and parried away many efforts on target from Janice Lawlor, who also had one magnificent shot denied by the cross bar. On a different day, Gilberdyke could have scored many more.
However, the away team persisted, and showed their class once more halfway through the second half to grab a fifth goal thanks to a long range effort. Very impressive stuff.

The game finished 1-5. Both teams showed their potential, especially the newer players, some who were taking part in their very first football game.

Bring on the Season Start! 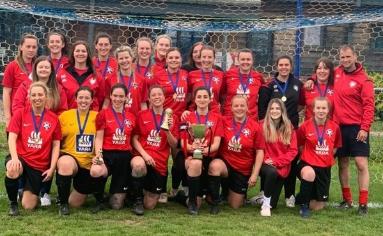 Congratulations to AFC Preston Ladies on retaining the League Championship