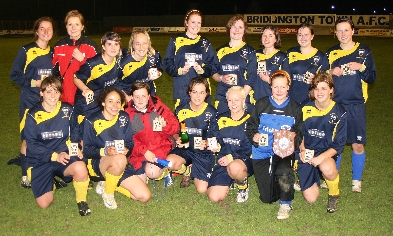 Hull University won the Development Shield with a 2 - 0 victory over a plucky South Cave.

University took the lead midway through an evenly contested first half.
In the second period South Cave came back strongly in an effort to get back on terms.
However, it was Hull University who produced another goal in the dying minutes as players felt the effects of the large Queensgate pitch.
The Player of the Match award went to South Cave's Rebecca Hardisty.

Information documents for Team Secretaries can be downloaded from here

A variety of information and forms can be downloaded here. The information is updated as details change and therefore the site should be consulted regularly.

Goal keeper wanted at cforce united women must be flexible and able to attend training and games .. Please email misslauramatson123@gmail.com or txt loz 07731339952 for further details .. thank you