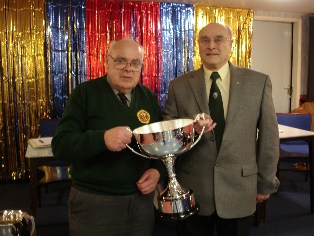 The Worcester & District Football League has been presented with a new trophy by Life Member Frank Southam in appreciation of the work done for the League by himself and his late wife Maureen. The new trophy will be competed for by clubs in the Sunday League Divisions 2 and 3.

Frank joined the Management Committee in 1985 and was the League Registration Secretary from 1986 until 2002. Maureen was League Treasurer from 1986 until her untimely death in 2001. It is believed that Frank and Maureen are the only married couple to hold League Officer positions at the same time.