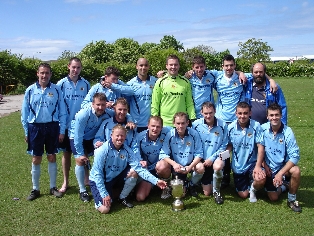 The Worcester League gets under way this coming weekend with eighty teams chasing honours, a net increase of six from last season. League Secretary Tim Phillips is particularly pleased at the increase in the size of the Saturday Division and the number of ex junior teams making the step up to adult football.

 We only had nine teams on Saturday last season and the competition was hanging by a thread. The Management Committee decided to waive League fees for the new campaign and we will now have fourteen teams competing this year, including Malvern Town Reserves, Malvern Rangers, plus previous youth outfits Newtown Sports, Worcester Anchors, Worcester Raiders and YM Rangers.

The influx of youth is added to on Sunday with the first appearances of Worcester Lynx, Malvern Rangers Colts and Worcester Colts who will play as Perrywood AFC Reserves.  A lot of clubs found there was nowhere to go after they had completed their Under 17 programmes and we are glad we have been able to provide continuation football, by finding places for them under the Worcester League umbrella, remarked Phillips.

Powick will be defending their Saturday crown but can expect a strong challenge from last seasons runners-up VBL Sports and Malvern Town Reserves.

On Sunday Arrow 2000 will be seeking a hat-trick of Premier Division titles with AFC Heenans again expected to be hot on their heels. A strong challenge is expected from two new clubs that have joined from the Evesham Sunday League, Upton Snodsbury and Crowle.

AFC Mazak will be confident of making a strong bid for the Division One title and it will be interesting to see how promoted teams Blue Star and Nunnery Wood Colts cope in a higher division.

Goodrest Juniors and Keyz04 have moved up to Division 2 where VBL Sports are likely to be among the favourites for promotion.

Hallow FC are welcomed back to Sunday football in Division 3 along with Nelson who have also re-joined the League. Malvern Victoria and fellow Malvern based teams, MTFC Athletic and Inter Express are expected to make strong bids for the championship.

West Malvern TC are competing in Sunday football for the first time and they take their place in Division 4 where Westside are the hot pre-season favourites for honours.

The League has signed up to the FA Respect campaign and all matches will be preceded by the handshake between both teams and match officials. Phillips is keen that all clubs take this seriously and wants to see a marked improvement in the behaviour of players towards referees and their opposition.  Players should remember that they are playing recreational football for enjoyment at Worcester League level, he remarked. There is no place for ill discipline in our competition and I urge all clubs to take the Respect campaign on board.