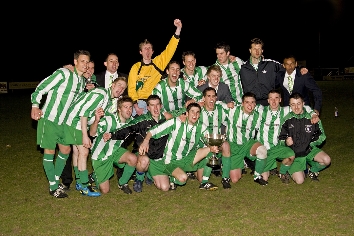 New Bohemians went one better than last year when they lifted the Cyril Milner Challenge Cup after an enjoyable final against Gleadless which they won 3-1.

The first half was mainly Gleadless piling pressure on the New Bohemians defence and in the forty fifth minute Lee Webber put them one nil up. After the break New Bohemians came out with renewed vigour and within three minutes of the restart Maurice Murphy grabbed the equaliser, six minutes later Richard Shipley grabbed the first of two goals and as the game was going into injury time it was Shipley who finished off a counter attack after Gleadless had pushed forward looking for the equaliser. That left no time for much more play and the trophy was theirs. Tom Payne was named man of the match by William Armstrong who also presented the trophies for the league.

Clubs primary and secondary contacts with emails and mobiles