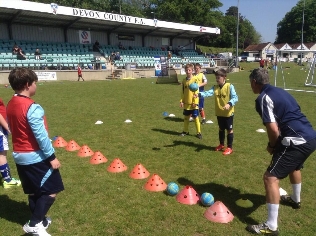 The Adults Finals Day at Coach Road kicked off with all five divisions taking stage on the Devon FA pitches and with teams battling for league titles and the Respect Fair Play Award. The Junior Ability Counts Festival also took place on the same day with over 40 junior disability Football players attending from Plymouth Argyle, Keyham Kolts Active Autism, Pinhoe Spartans FC, Torquay United Inspirations, Barnstaple FC and Twyford Spartans FC. The Junior Festival included fun coaching sessions in the morning delivered by the FA Tesco Skills Team (Marcus Lincoln and Dominic Edwards), Lee Tebby (Junior Ability Counts Co-ordinator and Twyford Spartans Coach) and Kevin Titchard (Torquay United Inspirations Coach) with a World Cup Festival in the afternoon for all junior teams. Every junior player and coach was a credit to their Football Club participating in every activity, improving their skills alongside having a fun, enjoyable day!

The attention then turned to the Adult Ability Counts Leagues with all to play for and a final match showdown in the Ability Counts Intermediate Division between Twyford Spartans FC and Barnstaple FC which decided the league title. The presentations then took place with the junior players receiving their trophies for their participation across the season with the adults presentation taking place after with teams collecting their trophies from each division. As the league is also part of the FA Respect Programme, throughout the season referees have marked teams on their discipline, conduct and fair play on the pitch. This enables the league to promote respect between players, coaches, referees and spectators.

The Devon Ability Counts League Winners, Runners Up and Respect Winners are below:

We are delighted as a league to offer opportunities to players of all abilities and impairments and this season has been a particular successful season with three teams that have participated in the National FA Disability Cup alongside the Devon Ability Counts League calendar. Thank you to league sponsors GMM Insurance for supporting the league this season and thank you to all the volunteers across the clubs for their dedication to coaching and running teams throughout the season including the referees. The finals day finished yet another fantastic season with both adult and junior festivals taking place on the same day, great team spirit shown by all teams and it was great to see every player enjoying the matches across every division. The finals day showcased just what the Devon Ability Counts League is as a fun, inclusive, social league for Disability Football