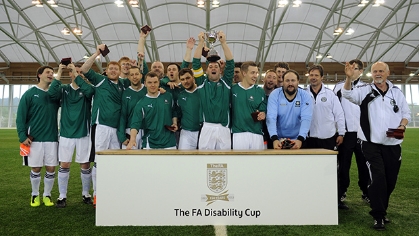 Plymouth Argyle were crowned the first ever FA Disability Cup Final Champions on Sunday after a comprehensive 7-0 win over Boston Pilgrims at St. Georges Park. A fine Stuart Richardson hat-trick was added to by goals from Kenneth Newman, Jon Smith, Alonzo Marshall and Steve Bunker as Plymouth ran riot against a spirited Boston team. The result reflected a ruthless display from Argyle, who set out early to dominate the game with their fluid attacking style.

Richardson, ably supported by the dangerous Martin Bovey and Jamie Poyntz, caused the opposition defence problems throughout the afternoon and would've opened the scoring a lot sooner had it not been for the thickness of the post. On 15 minutes, the former Newcaslte United academy player shrugged off his marker on the left flank and drove in to the box with a surging run. Boston 'keeper, Nicky Atkinson came out quickly to tighten the angle and did well to force Richardson wide but the striker still managed to fashion a low effort that struck the foot of the frame and Boston cleared.

Minutes later it was the post that again came to the rescue for Boston. This time, a defence splitting pass from Marshall was fed into the path of Bovey who took it round Atkinson only to cannon his effort against the post. Pressure continued to grow before the deadlock was eventually broken on 30 minutes. Another precise through-ball from midfield, this time from Bunker, found Richardson who made no mistake from 12 yards with a confident finish.

It could have been two soon after but for some decent work by Atkinson and defender Dan Simpson. Springing clear of the Boston defence, Bunker aimed a low shot across the Boston keeper who got just enough on the effort to slow it down for Simpson to get back and clear on the line.

Eventually though, the pressure finally paid off for Argyle who doubled their lead on the stroke of half time thanks to a delightful solo effort by Richardson. The striker, who is deaf in one ear and has limited hearing in his other, chased down a ball over the top before displaying superb awareness to coolly flick the ball first time over the advancing Atkinson.

For Boston, it had been a tough first half but one in which they had battled hard and shown tremendous character to restrict Plymouth to their two goal advantage. For the second period, they would have no doubt been looking to produce more of the same but suffered an early blow as Argyle got their third and fourth within ten minutes of the restart.

On 49 minutes, a dangerous corner into the box wasnt cleared and the ball fell to the grateful Newman, whose first time looping effort caught Atkinson flat-footed as it curled into the top corner. Then, six minutes later, Richardson completed his hat trick. Chasing down what seemed to be a lost cause, he managed to beat Atkinson to the pass before slotting the ball underneath him from the tightest of angles.

The two goals seemed to knock the wind out of Bostons sails and they struggled to find any foothold in the game as they faced up to wave after wave of Argyle attack. Substitute Boston goalkeeper, Darren Dugdale, was forced into a superb save to deny Richardson his fourth, while both Bovey and Poyntz saw excellent build up play undone by poor finishes.

When number five did come, it was thanks to some neat play down the left flank from Bovey whose low cross found Jon Smith in the six yard box for the simplest of touches. Boveys influence on the game continued to grow and he should have had his reward on 83 minutes when he ran clear into the box only to wastefully shoot over.

But while Bovey lacked the precision to finish, the same wasnt true for full-back Alonzo Marshall who grabbed Plymouths sixth six minutes from time. The Boston defence appeared to switch off momentarily, allowing the unmarked Marshall to collect a ball over the top and fire a low left-footed effort across Dugdale and in off the far post.

The win was rounded off two minutes from time when Richardsons jinking run into the box was abruptly ended by Dugdale, whose rash challenge left referee James Scerri with no option but point to the penalty spot. Bunker stepped up to take it and calmly dispatched the ball low down to Dugdales right hand corner to confirm Plymouths name on the trophy.

After the game, manager Graham Eyles, was delighted by his sides performance and believed that the level of football on display reflected the quality of both sides and the tournament as a whole. He said: It is a fantastic achievement. The boys have worked extremely hard and it shows the ability of the boys we have got here.

Although they have disabilities, they are equal with everybody else in their own area. Some of my boys I feel are quite exceptional in the way they think. They played really well and they worked hard for each other.

But you only have to look out there to see what we had from both teams. We had some really great football. I think disability football needs to come on more and more now. This is a fantastic competition but we need this now to grow.