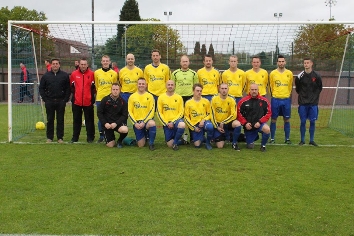 Highridge United secured their first Premier Combination League Cup trophy since 1998, as a second-half rout of Division One Frampton Athletic at the Cribbs Friends Life Sports Ground earned them their third trophy in as many years.

Frampton, despite their underdog tag, went into the game quietly confident of pulling off a surprise having beaten Premier Division duo Old Sodbury and Shaftesbury Crusade in the previous two rounds. But Highridge were to prove a step too far for the team from Beesmoor Road and they were left to reflect on a cup final defeat that compounded a week in which they saw their promotion hopes end with a 4-3 defeat to Olveston United last Saturday.

The first-half had been one of promise for Frampton, with the South Gloucestershire outfit the better side for long periods. However, they failed to put away their best chance and goals from the excellent Harry Hocking and Dan Elsom shortly after half-time paved the way for a commanding second-half display from Premier Division Highridge.
The game began the way you would expect a cup final to, with both sides demonstrating fierce commitment and energy as they sought in vain to take the lead. Frampton, with the strong wind behind them, won two early corners that came to nothing whilst winger Elsom saw a shot comfortably saved by Steve Scannell.

Both sides direct style was making for a fast opening period, with Elsom and Highridges other wide man, Ashley Lawrence, looking dangerous on the rare occasions they received the ball and striker Kevin Taylor showing some neat touches without causing any damage. Yet it was lower league Frampton who appeared to have the more effective game plan, using the combination of Liam Barretts strength and hold-up play with George Pikes searing pace to create problems for the Highridge backline. A miscommunication between right-back Edward Cockle and goalkeeper Richard Jenkins after 15 minutes allowed Barrett to nip the ball round Jenkins before Cockle recovered well to block his goal bound shot.

Highridge were struggling to stamp their authority on the game  a tame effort from number 10 Nathan Rendell their best chance of a poor half  and frustration began to set in. Hocking and Lawrence both received yellow cards for wild challenges whilst Taylor berated his supporting forward Rendell for a missed tackle.Moments before half-time, Frampton almost took advantage of their superiority. Good work down the right from Mike Beake allowed Pike to pull back for strike-partner Barrett who seemed certain to score  only for a magnificent goal-line clearance from Cockle to keep the game goalless.

It didnt take long to find out quite how important that moment was, as just a couple minutes into the second-half Hocking opened the scoring with a stunning 25-yard strike that hit the bar and post on its way in. A minute later, Taylor almost volleyed in a second but before Frampton had time to breathe a sigh of relief, Elsom fired Highridge 2-0 up after good hold-up play from Rendell on the corner of the box.

Highridge were buoyant, Frampton shell-shocked and seconds later Taylor thought he had put the game to bed with a sublime overhead kick but it was ruled out for offside. The Premier Division side continued to dominate with Hocking dictating the play from centre-midfield and despite Pikes valiant efforts to drag his team back into the game with a positive run and decent strike on goal, it was not long before his team conceded a third.

After 67 minutes, Elsom and Randell once again combined down the left wing but this time roles were reversed as Elsom bullied his way through the defence and crossed for Randell to finish from 6 yards out, erasing any doubt as to who was taking the trophy home. Credit to Frampton, they continued to work hard and push forward, almost grabbing a consolation through centre-back Barney Yates after an excellent cross from substitute Mark Totterdell.

Highridge, though, were relentless and a superb switch from forward Grant Farrell, on for Taylor, found Lawrence on the left-wing who beat fullback Steve Bywater with an excellent piece of skill and arrowed a low shot into the bottom corner to make it 4-0. Unfortunately Framptons discipline began to dissolve in the final 15 minutes with 3 players booked for dissent by referee Lenny Davis, who controlled the game well. Highridge remained in charge as they slowed the game down, though Elsom continued to threaten the opposition defence and almost added his second with a powerful drive that was well-saved by Scannell.

Stoppage time saw centre-back Joe Parsons get himself on the scoresheet with a simple header from a fine corner delivered by young substitute Lewis Dunn, leaving Highridge to celebrate a resounding 5-0 victory and Frampton to rue what might have been.

For information about the F A whole Game system to date, log on to the following link