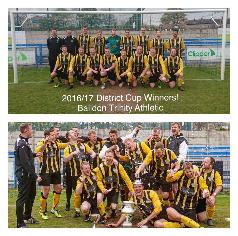 Baildon started this match as underdogs against a Pool side two Divisions higher and the gulf showed in the early exchanges. Pool came out of the blocks determined to show the lower placed team that they intended to take the trophy home with them and threatened the Trinity goal on several occasions. Dave Naylor in goal was the busiest man on the pitch making several good saves and some vital blocks with his feet. Not that it was a one man show as the three central defenders, Graham Carney, Elliot Moody and Andrew Radosevic as well as the wing-backs Lee Rands and Lee Newall were putting their bodies on the line to keep the goal intact. Midfield trio of Dean Rands, Nick Wadsworth and Lee Mathers were working hard and Louis Francis and Ben Craven upfront worked their socks off to gain possession of the ball. Pool finally made the break through on 25 minutes when a belter of a shot from the edge of the area flew past Naylor as he dived to his right in an attempt to stop the ball hitting the bottom corner of the net. Baildon heads dropped for a short time after this but soon regained composure and began to get more in to the game. Wadsworth and Carney picked up yellow cards as half time arrived but Trinity were relieved to go in only one down.
HT Baildon 0 Pool 1

Trinity started the second half more on the front foot but still had to be alert to thwart the dangerous Pool attacks, Newall twice being penalised before the referee, Lee Creasy, lost patience and flashed a yellow card for the 3rd time. Baildon found the equaliser from a well rehearsed corner routine, swung in from Newall for Carney to head home. It was nip and tuck for the rest of half with Pool just edging the shot count but most off target. Darren Rands was brought on as the half wore on to bulk up the mid-field in place of Craven. Minutes later his strike partner Francis, who like Craven had run himself in to the ground, went down with cramp and had to be replaced- Steve Sample taking his position up top. With an extra thirty minutes looking likely, Danny Jowett replaced Wadsworth in a last attempt to win it in normal time but it wasn't to be.
FT Baildon 1 Pool 1

Both sides tried to play Football and create openings throughout the two 15 minute periods and as the game wore on the Trinity lads looked dead on their feet, not having played in a few weeks and the size of the pitch being major contributory factors. The last few minutes was hoof it anywhere and hang on for the lottery of the penalty Shootout.
Full time after xtra time Baildon 1 Pool 1