SCAFFOLDING FALL DOWN AT THE BRIDGE 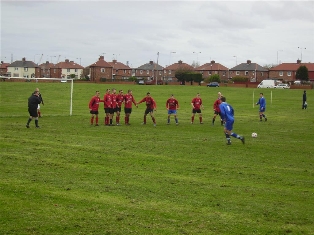 After last weeks cruel defeat in the Semi final of the cup Scaffolding taste league defeat for only the second time, but must aim to bounce back.

Robertsons scaffolding travelled to temple park to take on old rivals The Bridge where Robertsons knew they would be in for a hard match but their confidence was high after the previous weeks exploits against Boldon Shack, Robertsons looked very nervous from the 1st whistle with none of the robertsons players getting hold of the ball and producing the football that is expected from them. Bridge put Robertsons under pressure for the entire 1st half and scored 4 goals to leave Robertsons players shell-shocked, the players were pointing the finger at each other and blaming the referee when really they only had themselves to blame. Robertsons were relieved to get to half time with the score at 4-0, at the half time break players were tearing into each other when it calmed down

Robertsons changed to a 3-5-2 formation which looked good as soon as the 2nd half kicked off with Robertsons creating 2 good chances early in the 2nd half, the bridge in a rare attack scored a 5th goal which the referee judged to have crossed the line but this did not stop Robertsons they kept attacking and taking the game to the Bridge. Robertsons then made 2 substitutions Craig Lowther coming on for Dan Purvis to play on the right hand side of a 3 man defence and Jonathan Matthews coming on for Stevie Stephenson, Wayne Henry stayed up front for a Robertsons attack and was walking back to his defensive position when the Bridge goalkeeper deliberately kicked the ball at him leading to the referee awarding robertsons an indirect free-kick at the edge of the box for un-gentlemanly conduct. Dave Smith laid the ball to Brian Johnson who coolly bent the ball into the far corner for his 2nd goal in as many games after his comeback from injury. Robertsons 2nd goal was one of the more trademark goals with 6 players involved in the move which started on their own 18 yard box and finished with Christie Elliotts low drive into the bottom corner, the final score was bridge 5 Robertsons 2.

Robertsons attitude and commitment in the 2nd half showed the right way to respond to going behind, they need to forget about the 1st half performance and take positives from their 2nd half display because you do not become a bad player or a bad team overnight.