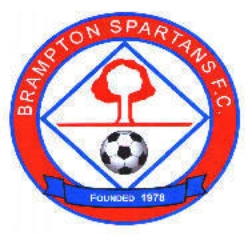 Background of club and squad's achievements as well as contact points.

Brampton Spartans FC established in 1978 - our current U14's squad (2012/12)have been together since U6 with the core of players still with us. The squad is made up mainly of players from Brampton and the surrounding villages.

Ethos:
Our goal is to develop the lads football skills, strive to do the best they can, learn what it means to be part of a team but most of all to have fun.

These pages are updated by Mark Smith who can be contacted at custardcreamhouse@ntlworld.com

Please contact the teams directly. Teams are listed in by age.