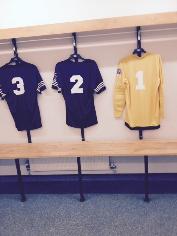 
Whaley Bridge were beaten by Denton Town in a result that leaves the title race completely up for grabs. The Tameside natives beat the league leaders by two goals to one at Whittles Park to move themselves up two places to sixth.


Linotype Cheadle Heath Nomads won at home to bottom side, Garswood United to increase the gap between themselves and the chasing pack, whilst also moving to within touching distance of the top four. A solitary goal was all it took for the Stockport side to take away all three points.


Greenalls Padgate St Oswalds beat Rudheath Social 2-1 in the midtable clash in Warrington. The team in green were impressive in what was their first league victory of 2017. The other Premier Division game saw Malpas take on Eagle Sports. Eagle Sports continue their fine vein of form with a 2-0 victory in Great Sankey, keeping them ahead of Greenalls by just a point.


Warrington Town Reserves extend their lead at the top of the table to three points following their 2-1 victory over second-placed side, Pilkington. Goals from Dylan Glass and Jack Richards gave the league leaders all three points, the latter of which has been lauded by Town supporters as one of the best of the season.


Egerton were impressive in their 2-6 thrashing of Lostock Gralam at the Park Stadium. The result moves the visitors in the mid-table dogfight and they will be hoping to continue their strong form in the coming weeks to move up the table.


Cheadle Town Reserves lost once more this weekend against local rivals Mersey Valley. A brace from Dwayne Greenwood and a goal from Tyler Ferguson gave the Sale locals a 3-1 victory. This result moves Valley into the top four, ahead of AFC Macclesfield and FC St Helens.


AFC Macclesfield drew 2-2 with midtable side, Golborne Sports, at Stone Cross Lane. With FC St Helens not playing in the league (see ‘Cup News’ article that will be released during the week), Macc’s league position isn’t too badly affected – they drop just one place to fifth.


The final game in League One saw Daten host Grappenhall Sports in a goalless draw. The visitors move within a win of overtaking Cheadle Town Reserves above them following this game.
League Two


There was just one game in League Two this weekend as Deva Christleton hosted Winstanely Warriors. A 3-2 victory for the home side move them to within a point of league leaders, Windle Labour, however both sides could be caught out by Broadheath Central below them.


Eagle Sports extend their lead at the top to two points following their 1-1 draw with Knutsford. A Dominic Baker goal for Knutsford was cancelled out by Eagle’s George Toon to see both sides share the spoils after 90 minutes.


Golborne Sports put on a strong performance in their 3-1 victory away at Pilkington at the home side’s ground, Ruskin Drive. A brace from Gary Shannon and a Michael Koppell goal gave Sports the win, extending their gap over Malpas to 12 points.

Malpas Reserves remain stuck to the foot of the Cheshire Football League, with just one point this season. They will be hoping for an upturn of form in the coming weeks.