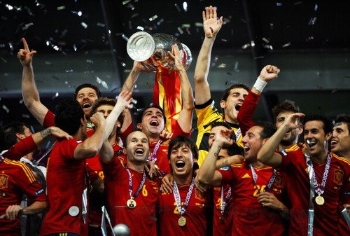 Forest get all oily while Sennockians seal the deal

Chigwellians surprised themselves with an easier than it sounds 4-2 victory over Amplefordians; Eastbournian (yet again) broke opposition hearts (this time the Stoics) with a last minute winner whilst Sennockians put Cholmeleians to the sword in a 5-2 romp.

Barring any last minute disasters, yesterdays victory means Sennockians become the first team to be promoted (in any division) in the Arthurian League this season so many congratulations to them (one notes that this is also their second consecutive promotion).

With Berkhamsteadians resting, Salopians were unable to take advantage as (despite the promptings of their silky smooth playmaker Andrew Saunders) they could only manage a dour stalemate against Brentwood. In truth, this result was more useful to Brentwood as it allowed them to put daylight between themselves, Aldenhamians and Malvernians at the foot of the table.

Cartusians 2nd and 3rd XIs continued their stealthy climb up the table by squeezing past Lancing and Chigwell respectively. The Fratricide match up on February 1st promises to be a humdinger.

The surprise package of the division (and in some ways the entire league but more of that in future weeks) is the Old Wellingtonians. They continued their rich vein of form by defeating Etonians (their nearest challengers) 1-0. The divisions great entertainers (Cholmeleians) once again displayed their inherent defensive fragility by drawing another 8 goal thriller with Haberdashers which allowed the latter to gain only their 4th point of the season.

The grumpy Aldenhamians eased their relegation worries by strolling to an easy victory against a poor Radleian team in a match that was (thankfully) notable for its complete absence of drama. Radleians, on the other hand, were last seen poring over the league rules on relegation from Division 1. Marlburians took advantage of (and gained some measure of revenge over) the angry young men of Reptonians (who have an Arthur Dunn quarter-final on their horizon) with a comprehensive 7-2 victory. Chigwell maintained their dogged pursuit of Marlburians by recording an easy win against Haileyburians (who themselves are gearing up for the visit of Carthusians in the Arthur Dunn quarter finals shortly).

There was some semblance of normality as Carthusians opened up a 10 point gap at the head of the table (albeit having played more games than their immediate pursuers) by cantering to a routine 2-0 victory against Brentwood. At the other end of the table, the right (ahem) to play on Division 1 next season heated up as the 2 favourites for relegation - Etonians and Harrovians had contrasting results. With their Field Game, Arthur Dunn and LOB commitments on the horizon, a distracted Eton carelessly threw away a 1-0 lead to succumb to a determined Lancing team whilst Harrovians (after their humiliating capitulation last week against Carthusians) rediscovered their cojones to win a tight, tense affair against Cholmeleians to give themselves a glimmer of hope of avoiding the drop.

As it stands, the Super Clasico will not be a place for faint hearts.

Top met bottom in the game's only league match and as one might expect, Alleynians proved too strong for Westminsters.

Many congratulations also go to Old Foresters who overcame the slippery NUFC Oilers in the quarter-finals of the AFA Middlesex Senior Cup competition. They will face one of the SALs traditional powerhouses in the shape of Polytechnic.