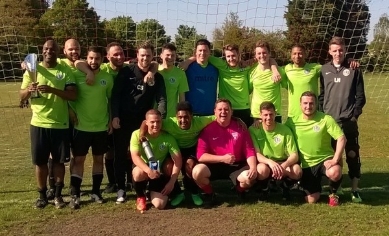 Selhurst United, following their 2015 Mike King Trophy win. Team Manager Gavin McGowan admires the trophy. MOTM Dan Jupe is on the left of the front row, injured Club Captain Luke Herbert on the back at the far right. Not forgetting Reverend Rob, wearing the blue bib.

A very late goal from Man of the Match Dan Jupe clinched a 2-1 win for Selhurst United over New Life in a splendid Mike King Trophy Final which this season returned to its traditional home of Stanhope Grove.

It was Dan Jupe who forced the only memorable save in the first half, when New Lifes keeper Frank Terry pulled off a fine save to push a fierce shot around the post for a corner. Other than that, the first half is probably best remembered for a pitch invasion which held up the game for a few minutes when a stray dog ran loose on the pitch and several close misses by both sides when headers went over the crossbar.

Selhurst United took the lead though early in the second half with a Stephen Tipton header and looked to have doubled their lead shortly afterwards following what looked suspiciously like a goalkeeping fumble. There was little or no protest though when the goal was disallowed and the score remained at 1-0 until New Life equalised with 20 minutes or so remaining when Joe Strawson capitalised on a moments hesitation in the Selhurst defence to slam in a bouncing loose ball from close range.

With the end of 90 minutes approaching, Selhurst squandered opportunities to restore their lead, firstly when Stevie Watts headed over the crossbar from a low, flat throw-in, then when finding himself put clear with only the keeper to beat, Dan Jupe managed to somehow hit his shot against the keepers outstretched legs.

However, with the match announcer poised with microphone ready to inform the crowd that extra time would be played, Dan Jupe seized on a wayward header from a New Life defender intended for his keeper by chasing down the loose ball and made no mistake this time by sliding the ball into the vacant net from an acute angle.

2-1 to Selhurst United then, with very little time remaining, and that is how the match ended, with Selhurst going one better than last season, when they finished as runners-up in the same competition, by picking up their first ever winners trophy.

Congratulations though go to both teams for producing an entertaining match, played in excellent spirit and excellently refereed by Paul Marriott, himself a former winner of the competition as a player and uniquely the first son of an official who has also refereed a Mike King Trophy Final. Father Brian was watching, no doubt proudly, from the touchline, although not entirely unsurprisingly, not without the odd critical comment here and there! And not forgetting Assistant Referees Garth Walcott and Dominic Wynter who were also so excellent that one hardly noticed them!