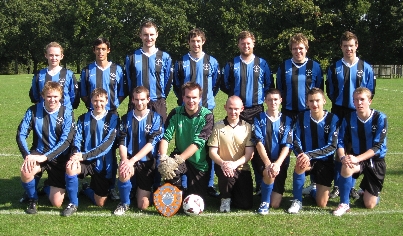 Christ Church Beckenhams promotion to Division 2 was secured this afternoon as our only remaining challengers Emmanuel Lightning fell to defeat away to UCF Reserves. It leaves Christ Church in second place on goal difference.

Much credit must be given to UCF, who put out a strong team and put their all into a game which had little riding on it for them having already won the championship. Top scorer Tim put in a hugely energetic 90-minute stint despite the fact that he runs the London Marathon tomorrow! UCFs professionalism is greatly appreciated and they were warmly thanked by the hoards of excitable Beckenham players (all four of us).

UCF were always the more potent team and had missed two glaring chances before taking the lead in the 44th minute. Emmanuel had looked dangerous on the counter however and came back into the game with a back-post header from a free kick. Their joy was short-lived however as UCF re-took the lead within two minutes of losing it.

Things got quite tense for a while as Emmanuel pressed, their Peter hitting a great dipping volley which UCF keeper Dave tipped over expertly. But then UCF turned the screw. Tim got away on the left and his cross drew an own-goal with 10 minutes to go. With legs tiring he got free again with two minutes left, slotting home UCFs fourth (NB this keeps Beckenhams record as the only team not to concede four to UCF at Stanhope Grove this season).

Muted celebrations at the final whistle, trying to keep respectful of Emmanuel who had been up in the promotion places all season up until two weeks back, and who played with great heart. But at the same time, great pride at Beckenham getting their deserved reward that can be added to the