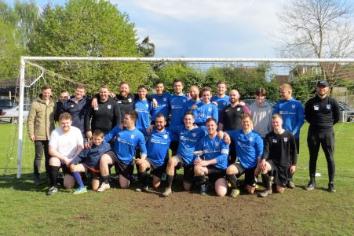 Hayes Ambassadors, after their victory in the 2019 Mike Laxton Cup Final.

Having been beaten twice from long-range during the first 90 minutes, 'keeper Simon Barrow saved four out of six penalties that he faced to win the Mike Laxton Cup for Hayes Ambassadors after scores remained level after extra time in the 2019 final.

After a pre-match deluge, there was more blue sky than clouds when this season’s Mike Laxton Cup Final between Chatsworth United and Hayes Ambassadors kicked off and Hayes clearly had the better of the early exchanges, producing several scrambled clearances in the Chatsworth penalty area. It was therefore no great surprise when Dave Patten put Hayes 1-0 ahead after 13 minutes as the Chatsworth defence appealed in vain for offside. Hayes stalwart, Tim Sheehan made it 2-0 just five minutes later and soon after should really have made it 3-0 when he chipped a good chance wide with only the ‘keeper to beat. Two minutes later though, with the Hayes defence failing to close him down, Chatsworth’s Nathan King produced a goal out of the blue, letting fly with his left foot from about 20 yards and he very nearly levelled the scores soon afterwards, putting a shot just wide from close range. Hayes ‘keeper Sam Barrow then pushed a shot wide for a corner as Chatsworth got themselves back into the game, but they were fortunate not to end the first half 1-3 down when Tim Sheehan inexplicably chipped wide again, this time from the penalty spot after Connor Mannion blocked a fiercely hit shot with his hand, with referee Dave Warwick not being fooled into thinking that it had hit him in the face, despite some play-acting of Oscar-winning quality.

With Mannion having somehow got away without a card of any colour and perhaps inspired by his dramatics, Hayes’s Kieran Fanner wouldn’t have earned an Equity card for his pantomime response to a challenge from Chatsworth’s captain Ryan Fellows. Both were fortunate to escape with just a lecture and this was the most noteworthy incident of the second half until, after 18 minutes, Chatsworth scored with another long-range shot out of the blue, this time from Ramone Garraway.
Scores weren’t level for long though because, with black clouds overhead and after confusion in the Chatsworth defence, Hayes’s Josh Vincent headed in from the second of two corners in quick succession to put his team back in the lead. Ten minutes later, the score remained at 3-2 despite an almighty scramble in the Chatsworth penalty area. Chatsworth ‘keeper Terry Hillier then managed to tip over a long-range shot and with time running out, another smart save by Hillier kept his team in the game, possibly for one last chance. Lo and behold, three minutes into stoppage time a Hayes defender somehow managed to slice a mishit shot into his own net to level the score and despite there still being time for Kieran Fanner to shoot over the bar at the other end, the match went into extra time.

With Tim Sheehan on the sidelines, taking a breather, and with Chatsworth veteran defender Pete Jarrett having been forced to leave the field injured in the closing minutes of full time, the average age of players on the pitch dropped considerably when extra time commenced but, although Hayes’ Sam Muir began to dominate proceedings in midfield, so did any prospect of any further goals, that was apart from when Terry Hillier earned prolonged applause for what one spectator was heard to describe as an incredible save. With extra time over and the teams preparing for penalties, another, obviously a Chatsworth supporter, was heard to comment that, ‘after the first 10 minutes, we’d have taken this.’

Chatsworth took the first penalty, which was saved, whereupon the next four were scored and the next six saved until, with the scores locked at 2-2 and the shoot-out having moved into sudden death, Tim Sheehan stepped up to the spot again and was successful this time, winning the cup for Hayes Ambassadors with their ‘keeper, Sam Barrow taking the Man-of-the-Match award, mainly for his four saves in the penalty shoot-out, although his opposite number, Terry Hillier, would have been an equally deserving winner.