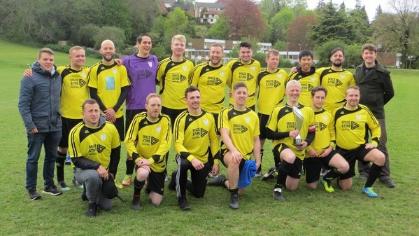 A goal scored by Emmanuel Lightning's Elliot Mack in the closing minutes secured their 2-1 victory over Selhurst United in 2019's final of the Mike King Trophy, played at Valley Sports, Caterham.

This was a repeat of the 2016 final, when Emmanuel Lightning eventually overcame Selhurst United on penalties after a controversial last-minute equaliser from Emmanuel’s goalkeeper, Martin Bruce, had taken the match into extra time. Bruce was once more in Emmanuel’s No.1 shirt and again had opportunity to display his penalty-saving prowess but, instead of being played at the traditional venue, Stanhope Grove, Beckenham, which is also the home ground of Selhurst United, on this occasion the game was played at Valley Sports Ground, Caterham. Fortunately, the new location seemed to give some shelter from the after effects of Storm Hannah and a good crowd gathered to watch the match, despite the somewhat chilly conditions.

Selhurst United probably had the best of the play in the first half, with Dave Hawkins looking dangerous every time he had opportunity to run with the ball, that was until he was forced to leave the field with injury following a late tackle for which a yellow card could easily have been shown by a less tolerant referee than Stewart Baldwin. Meanwhile Emmanuel’s main threat seemed to come from the pace of Luke Miller, although it was Elliot Mack who came closest to scoring, firing a shot just over the bar in the 42nd minute, and four minutes later, at the other end of the field, Selhurst United’s Nathan Taylor almost broke the deadlock by hitting the bar from close range, with the whistle for half time being blown shortly afterwards.

Fortunately, apart from those that had bought their camping chairs and those that had found a place on one of several park benches, the crowd didn’t have to get back to their seats for the start of the second half, because otherwise they would have missed most of the game’s most important action. Within a minute of the restart, Emmanuel Lightning had scored, with Joe Norris heading in Kent Mercer’s free kick. Having been brought on at half time, this was only Norris’s second touch of the game, although the writer is reliably informed that his first had been absolutely awful!

Within a couple of minutes though, Selhurst United were awarded a penalty following a rash tackle by Phil Pursehouse on the edge of the box. Up stepped Chris Smith, only for his attempt to be saved by Martin Bruce, diving to his left, but further drama ensued as the referee ordered the kick to be retaken. Steven Tipton replaced Smith and scored, levelling the score at 1-1 and that’s how it stayed for much of the remainder of the game. Mack missed what looked like a good chance to score when midway through the second half he headed wide but, with time running out, Luke Miller broke away down the right and hit a low cross which Mack was on hand to knock into the net, putting his side 2-1 ahead. There was still time for Selhurst’s Dan Jupe to drive a chance wide off one of his own players, and for a flurry of three yellow cards, but the victory went to Emmanuel Lightning, with their captain, Chris Gilbert, collecting the trophy for the second time in the last four seasons.

With Luke Miller meriting an honourable mention, the Man-of-the-Match award was given to second half substitute Joe Norris who, in addition to scoring the opening goal, it was reckoned had brought a more physical dimension to Emmanuel Lightning’s play in the second half.