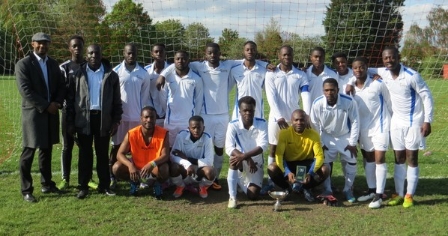 2015 Mike Laxton Cup winners, Trinity Baptist, with the trophy. Captain Tommy Lucas is standing behind goalkeeper and Man of the Match Nana Oye. Club Secretary Nana Kwame, their coach and Team Manager Raphael Agyemang are on the far left.

After a frenetic 2015 Mike Laxton Cup final, in which Trinity Baptist overcame Celestial United by 2-0, Trinity goalkeeper Nana Oye was given the Man of the Match award, mainly for two spectacular first half saves which kept his side in the game.

The action was fast and furious, frantic and sometimes frenetic, but lacking flair or finesse. There was plenty of pace and power, but very little poise or precision, an abundance of athleticism, but little accuracy, a copious amount of courage and commitment, but very little craft or control and oodles of energy and enthusiasm but, to be honest, very little entertainment for the rather meagre, parsimonious crowd.

The game cried out for someone to slow things down and put their foot on the ball, but passing movements were rare. Celestial United probably looked the better team in the first half but, as has too often been the case in finals of this competition, of which this was their fourth in consecutive seasons, they squandered what chances they had in front of goal. None more so than when they missed a first-half penalty, the ball cannoning back off the foot of the post to the penalty taker who put it wide. Of course, as correctly pointed out by Assistant Referee Elvis Osemwegie, in those circumstances, with no other player having touched the ball, the goal would not have been allowed, but it was probably just as well that this didnt happen!

Trinity Baptist improved in the second half and took the lead when a crossfield ball looped up off a defenders foot, leaving the Celestial keeper marooned and enabling Trinity's Kwabena Efah to slot the ball into an unguarded net. A second Trinity goal from Adeyemi Adeniran late in the game made their victory secure..