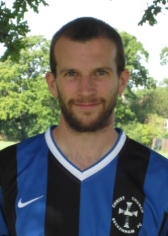 Sam last missed a game in September 2006, when he avoided a pre-season friendly by being on holiday in South Africa. Since then he has been on hand to feature in every game, starting ninety times and coming on as a sub ten times. In total he has 176 appearances for the team, the fifth highest on record.

Today's game was a classic Oliver central defensive performance, with countless clearing headers and hoofs denying Park Road the chance to score more than once.

Here's to another hundred before the legs give up...!