Appearance Milestones For Gee And Oliver 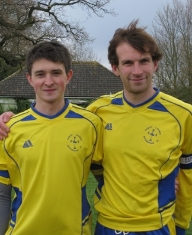 Winger Dave Gee was starting his 50th game for CCB in a row, having started every game of the 2007-8 and 2008-9 seasons. Gee made his debut in 2006 and indeed, since then has only ever missed a game when away touring with his relatively-famous band, Isobel.

Team manager Sam Oliver has had double reason to celebrate this week. Last Saturday's game with Hope was Oliver's 150th cap for CCB, placing him fifth in the team's modern-day appearance charts. Today's game was Oliver's 75th game in a row for the team, having played every game since missing a friendly in September 2006 when on holiday in South Africa. During this time he has started 63 games, come into the fray as a substitute following refereeing duties ten times, and twice been restricted to substitute appearances by Great South Run-related injury issues!

Ironically, both players managed to score this afternoon! Gee notched his 15th goal of the season and Oliver his third, although this was the first time he's scored in two consecutive games since 2002!