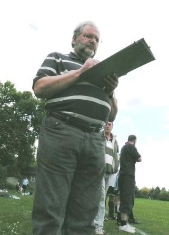 You did want a match report didn't you? 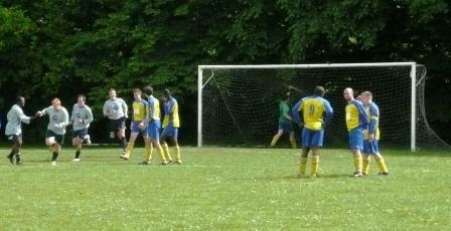 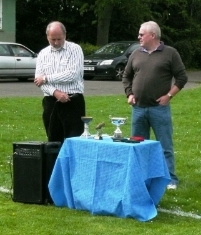 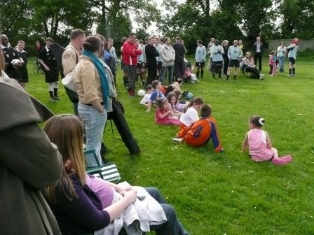 ...in front of the gathering crowd... 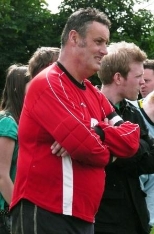 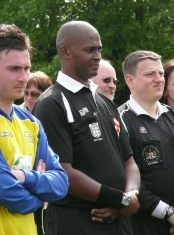 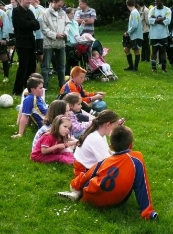 ...and some future players? 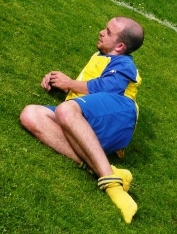 But no doubt somewhat disappointed, someone is taking things easy now! 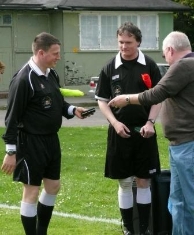 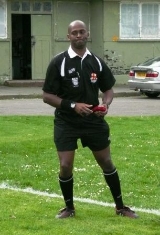 ...as does referee George Hanson, pictured after receiving his. 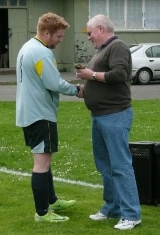 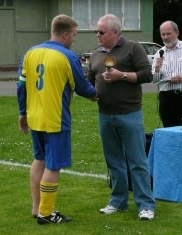 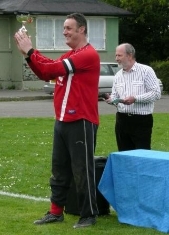 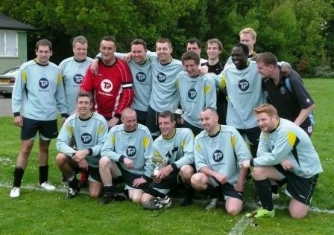 The Oakhall squad after receiving the Mike Laxton Cup... 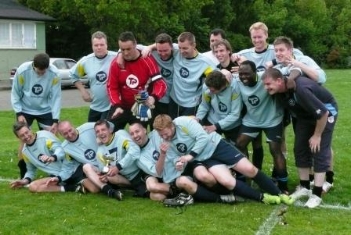 ...before Richard Fleming brings down his own team this time!

Despite spending the last few minutes of the game hobbling around in midfield, Oakhall's veteran goalkeeper and captain Peter Hardy was able to collect the Mike Laxton Cup after his team's 3-0 victory over King's Church Catford in the 2009 final.

The sun emerged from behind the clouds just as the whistle blew to start the 2009 final of the Mike Laxton Cup, and with the preponderance of yellow, blue and grey in the teams' kit as well as in the sky, one member of the crowd wondered if the match had been sponsored by Ikea!

Within two minutes, Oakhall striker Matthew Dean had hit the post. By then King's had already missed with a shot and five minutes later again went close, Dan Frammingham heading narrowly over the bar from a right wing cross. After 10 minutes, Oakhall were ahead, with Masote Kalembo making the most of a slight hesitation in the King's defence to race down the middle of the pitch and latch onto a long punted clearance from Richard Fleming, chipping the ball over the stranded King?s Church 'keeper Adam Kelly and into the net.

Oakhall could easily have gone 2-0 up just eight minutes later when a corner was headed goalwards, only for the ball to be cleared from just under the bar by their own centre-back Steve Ledger! Another misplaced header, this time from a King's defender, led to Kalembo hitting the King's crossbar, whilst at the other end Dan Frammingham had another good chance after 20 minutes, his header this time going narrowly wide.

What would perhaps prove to be the key incident of the game came 37 minutes into the first half. After a goalmouth scramble, with Steve Ledger again heavily involved in the King's penalty box, there was initial confusion as it appeared that a goal had been disallowed. After consulting with assistant Ashley Barnes, referee George Hanson was left with no option than to show a red card to King's Luke Catley, who was judged to have handled on the line, the resulting penalty confidently slotted home by Richard Fleming.

Fleming was in the action again in the closing stages of the half when he was perhaps lucky not to have seen yellow for a rash tackle, the resulting free kick being headed over, again by Dan Frammingham, who looked threatening throughout but seemed somewhat unfortunate not to have got his bearings quite right on the day.

So, 2-0 to Oakhall at half time and the regular goalmouth action continued into the second half, with chances falling to both teams King's normally prolific goalscorer Ben Lindsay headed tamely over the bar, Matthew Dean smashed a shot wide and then Dan Frammingham worked a good position for himself but hit his shot well wide. Oakhall were the first to make a substitution, with Mark Humm coming on to replace Steve Ledger, and with King's then enjoying a spell of sustained pressure, it was hard to tell which team was playing with only 10 men. This spell of pressure though was perhaps interrupted by an injury to King's midfielder Ayo Oyabayo, who appeared to go down with no-one anywhere near him but was eventually able to continue, as soon afterwards Oakhall went 3-0 ahead. Again a slight hesitation at the centre of the King's defence, who may have thought Kalembo was offside, allowed Matthew Dean to run through unopposed and score.

Immediately both teams made changes. King's sent on Steven Davis to replace Sam Frammingham whilst Oakhall replaced Dan Usher with Joel Amos, who then proceeded to set up a series of chances, all of which were squandered. At the other end, Dave Barden headed off the line and with Captain Hardy not required to make a meaningful save in the whole match, this was probably as close as King's got to scoring, despite playing well throughout. Not unsurprisingly though, they did become a bit ragged towards the end when, on more than one occasion, Oakhall looked bound to score, but were denied by saves by Adam Kelly.

Oakhall swapped Stuart with Stewart for the last few minutes, with Baldwin replacing Cook, and then came an impact of seismic proportions as Ben Lindsay collided with Peter Hardy, the surviving member of Oakhall's twin towers, his now long-retired brother Neil being among the 80 or so spectators on the sideline. Unable to continue in goal and with Oakhall having now used their three substitutions, obviously determined to finish the game, Hardy declined suggestions that he leave the pitch despite his team being 3-0 up and, when Fleming was penalised for what appeared to be yet another great tackle, perhaps discovered another new role for himself in the team, as the wall!

The final whistle blew shortly afterwards to bring to an end what had been an excellent game, well refereed, and played in exemplary spirit by both sides, the Man of the Match award going to Richard Fleming for his performance at the heart of Oakhall's defence.