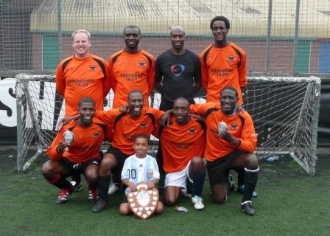 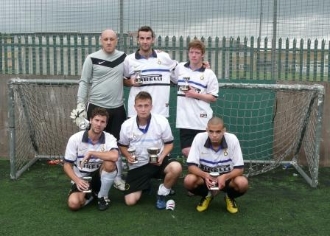 2011's Five-A-Side Runners-Up, Christ Central Church. But is that some of the bananas left over from last year than I can see? 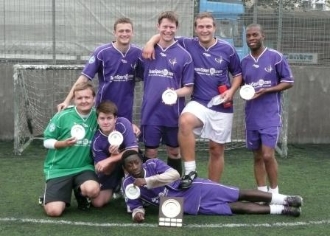 Lewin Sports Band of Brothers avenged last year's defeat in the final of the League's pre-season 5-A-Side competition when they beat a team from Christ Central Church, several of whom had appeared then as Penge Bananas!

Only 23 teams entered this years competition, but for once all teams that entered actually turned up, most of them on time, and so the tournament got off to a prompt start at 11am with the teams divided into four groups. The two eventual finalists emerged as group winners, together with Lewin Sports and St Marks Battersea Power, but these last two teams lost in the quarter finals to Athletico Bromley and Coptic United respectively, neither of whom were able to sustain their winning run beyond the semi-finals.

Meanwhile, the last 16 of the Plate Competition, a consolation event for those teams that had not managed to finish any higher than fourth in their group, saw a meeting of the two teams that had not managed to accumulate so much as a single point between them. St Dominics Lions emerged victorious over Park Road but succumbed in the quarter-finals to Christ Central Dingoes who then went on to defeat St Dominics Cobras to reach the Plate Final.

In the other half of the draw, having finished bottom of their qualifying group, the fortunes of Hope Eagles soared as they put together four successive wins, although it took a prolonged penalty shoot-out for them to overcome Real Bromley in the semi-final. Hopes they had of going home with a trophy disappeared though as they lost to the Dingoes in the final.