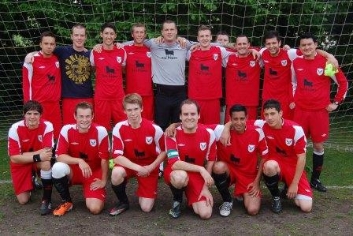 Watch out! He's behind you! The Eagles are pictured before the 2011 Mike Laxton Cup Final, when they had hope of lifting the trophy 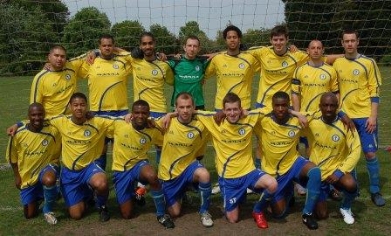 As were Lewin Sports. But just a minute, where's Lewis? 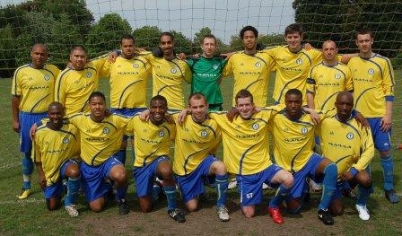 Found him! Note the addition back left. 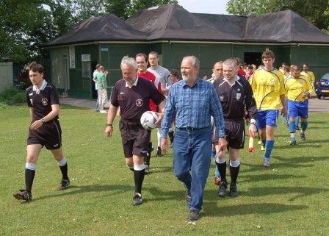 The League's Referees Secretary, Graham Russell and the match officials lead the teams out onto the pitch. 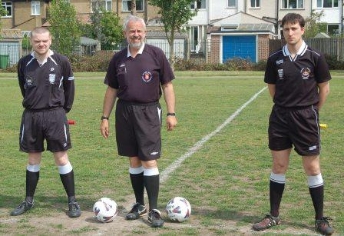 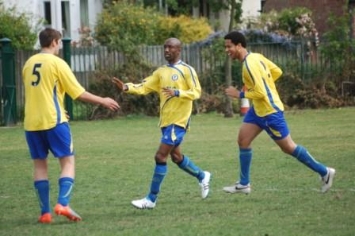 Matt Napier celebrates the opening goal with No.5 Steve Hodge and Nathan Baines looks pretty pleased about it too. 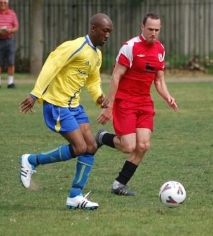 Another shot of the eventual Man-of-the-Match, Matt Napier as he takes on Eagle's right back Steve Baughen. 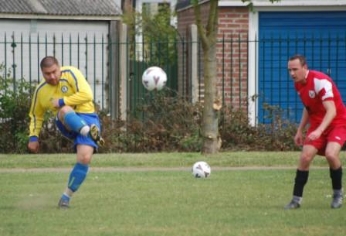 Baughen again, as he and Adriano 'The Tank' Lai keep their eyes on the right ball! 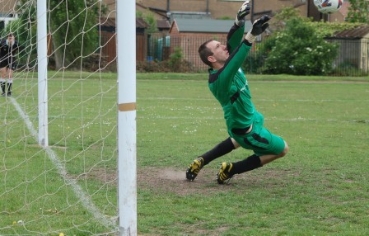 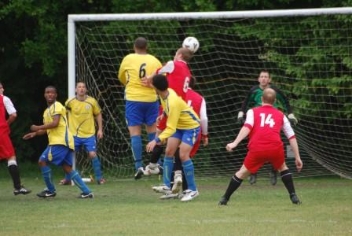 Goalmouth action as the respective No.6s, Dan Josephs and Will McMenamin rise to the challenge. 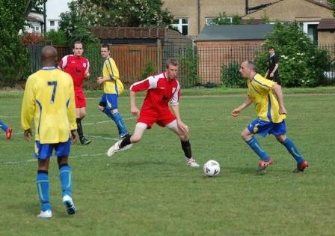 Late in the game, and head up, Lewin skipper Dave Braham, is still looking to thread a telling pass. 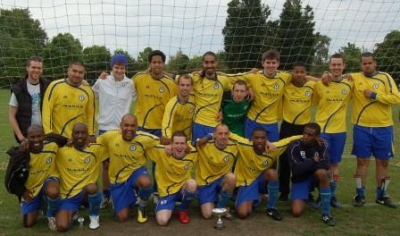 It's all smiles from Lewin Sports (well nearly all!) after they've been presented with the trophy. Team Manager Sam Talbot (centre front, with red boots) looks particularly pleased with his team's victory.

Played on 7 May, the first of the League's two cup finals of 2011 featured Hope Eagles and Lewin Sports. Read on to find out how the match turned out. Pictures courtesy of Dave Lock.

With a generous sprinkling of Lewin Sports veterans among the crowd that gathered in the sunshine at Stanhope Grove to watch this seasons final of the Mike Laxton Cup, a four goal blitz in the minutes either side of half time by their present day contemporaries extinguished any realistic aspirations that their opponents, Hope Eagles, might have had of lifting the trophy.

Lewin had initially taken the lead after about ten minutes when Matt Napier teased a delicate chip over the not inconsiderable frame of Eagles keeper Rob McMenamin. Thereafter the score had remained at 1-0, with the Lewin midfield of Dave Braham and Lewis Farquharson mainly controlling the middle of the park. Hope Eagles meanwhile had chosen to pack their midfield but, despite the ball-winning industry of Gavin Dixon, failed to supply very much useful service to lone striker, Jack Grogan, apart from a few occasions when Tommy Whelan managed to link up well with him from midfield.

Then, after 40 minutes, the Eagles were awarded a free-kick, 30 yards out, which Shea Flynn struck hard and low against the right hand post of stranded Lewin keeper Gary Braham, only for the ball to ricochet straight across the goal behind him, strike the other post and bounce away to safety. Almost immediately afterwards though, Flynn was given another chance to score when the Eagles were awarded a penalty following a push in the back. The chance to equalise was squandered though as, although firmly struck, the penalty was at a height which enabled Braham to pull off a diving save to his right, shortly followed by another to his left. Your correspondent had already noted that Hope Eagles were unlucky to be 1-0 down at the interval when Lewins ever-dangerous Joseph Baines jinked his way through the Eagles defence to double his teams lead shortly before the whistle blew for half time.

Emerging for the second half, it was clear that Hope Eagles needed either a change of tactics or a change of fortune for them to get back into the game, but any hope they might have had of doing so were blown away within just a few minutes of the restart. First of all Matt Napier was released down the right to score his second, excellently taken, goal of the game, closely followed by one from Lewin No.9 Matt Hawes and then another, sweetly struck, again from the right, by Lewis Farquharson.

Only 8 minutes of the second half had elapsed and, with the score at 5-0, Lewin began to turn on the style. To their credit though, Hope Eagles stuck to their task and were rewarded after 15 minutes when the Lewin keeper somehow allowed a shot from Will McMenamin to squirm under his body and creep agonisingly slowly across the line. Thereafter, although both teams had further chances to score, there were no more goals and the final whistle was greeted by generous applause for both teams. The match had been contested in excellent spirits, a point reiterated by the Leagues Referees Secretary, Graham Russell, in a brief presentation ceremony after the game when recognition was given to match officials Graham Ray, Peter Krajewski and Paul Marriott and the Man-of-the-Match award given to Matt Napier before, with champagne corks already popping, the winners trophy was presented to Lewins captain Dave Braham by League Secretary Keith Bolton.