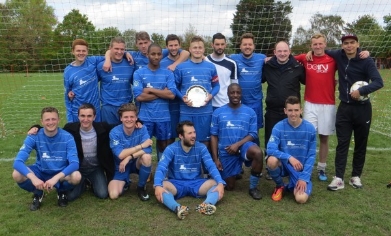 The winning Christ Central team, plus Team Manager Max Eaton and a couple of extras. Captain Ben Lee takes care of the Plate.

A hat-trick from Man of the Match Dan Morrison, plus extra time goals from Martyn Read and Ant Albertini served up a 5-3 win for Christ Central over League newcomers XLP in a scintillating 2015 Mike Laxton Plate final.

Christ Central first took the lead just before half-time and went further ahead with a second goal from Dan Morrision before XLP fought back to lead 3-2. However, having had a break on the sidelines, permissible for the first time this season under the repeat substitute procedure, Morrison was restored to the action to complete his hat-trick in the dying minutes, taking the match into extra time.

With extra time running out and the prospect of penalties looming, Christ Central went back into the lead and even managed to squeeze in a fifth goal to put the icing on the cake before the final whistle.

Congratulations to both teams for putting on a match that was a great advertisement for the League.