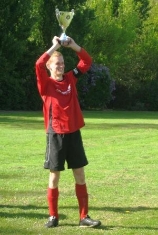 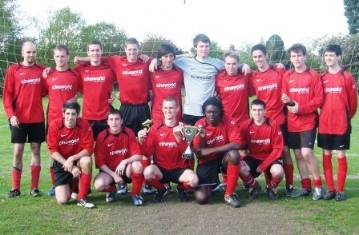 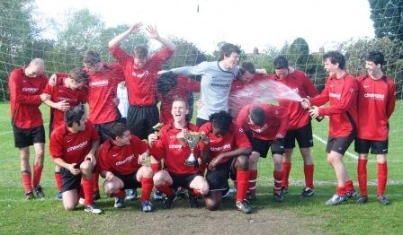 By beating New Life by two goals to nil in the 2009 Mike King Trophy Final, Newgen ensured theirs was the new name that will be engraved on the trophy.

In front of a crowd which eventually grew to about 150, neither side settled into any early rhythm, not helped by a prolonged stoppage after only five minutes when New Life forward Luke Ash collided heavily with Newgen's keeper Dan Dark. It was several minutes before Ash was able to rise to his feet and eventually return to the field, somewhat contrary it seemed to the wishes of his mother, watching on the sidelines!

If Ash was in danger of suffering from a nose-bleed, if balls had noses, so would the one in this game, booted as it was to such high altitude by New Life's 'keeper Ben Uzun. Even on the expansive acreage of Stanhope Grove, with the wind behind him he was easily reaching his opposite number at the other end of the pitch with just one bounce and this seemed like being the most memorable aspect of the first half until, after 43 minutes, Dark in the Newgen goal soared to his left to claw away a New Life shot seemingly bound for the top corner. However, with plenty of injury time still to be added, the half was far from over. In the 47th minute Newgen had a good chance but shot wide and three minutes later the ball fell kindly in the New Life penalty area to Matt Carvosso who, unchallenged, had the presence of mind to calmly side-foot the ball over the stranded 'keeper. Shortly afterwards the whistle blew for half-time, so somewhat against the balance of play, 1-0 to Newgen at the break.

Whatever was said in the dressing room at half time, it worked for Newgen because at the start of the second half they looked like a different side. Prompted by Darren Jones and Adam Wilthew in the centre of midfield they took a grip on the game, dominating possession and pushing the ball around confidently. Nevertheless goal-mouth incident continued to be a rarity and after 15 minutes New Life manager Richard Howes began to ring the changes, replacing Adam Ash with former Albanian youth international Rubin Alibaj.

A minute later, out of the blue, Newgen were 2-0 ahead. A ball played from left to right across the New Life box looked to be heading for Alex Obasoto but evaded him and went through to Newgen skipper Wilthew who, with his first touch, struck it powerfully into the top left corner of the net. In all honesty, although there were still almost 30 minutes to go, that was game over as, despite bringing on two more pairs of fresh legs, New Life never seemed able to raise their game sufficiently to get back into the match.

'Not a classic' was referee Graham Russell?s comment after the game when announcing Adam Wilthew as Man of the Match. Indeed, not the most exciting of cup finals, but nevertheless a good game, played in excellent spirits by both teams in front of a generous crowd who enjoyed the spring sunshine and contributed record programme receipts of £81 which will go towards the League's Charity fund.