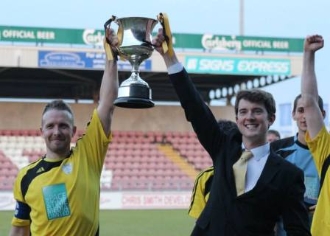 Captain Rob Jackson and Team Manager Paul Waddell hold the National Christian Trophy aloft. Anyone would think he'd won an election! But hey, after two cup wins in little more than a week, plus the division championship, what more could one wish for in a season? 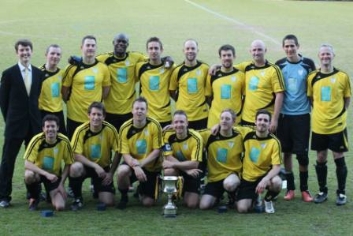 Emmanuel Lightning after their National Christian Trophy win in Northampton

One hundred Emmanuel Lightning supporters travelled up to Northampton last Sunday to support their team in the final of the National Christian Trophy against Ditton Athletic, from Widnes, Cheshire and they were very raucous.

All the meaningful action took place in the first half. Emmanuel conceded a penalty, which Martin Bruce saved with his outstretched leg, then conceded a goal to a shot from the edge of the area. But as they have done numerous times this season, Emmanuel came back into the game with two tactical substitutions turning the match on its head. After Stephen Martins and Jon James came on Jon J almost immediately won a penalty from Stephen's cross and big Jon Campbell scored his 40th goal of the season in all competitions. He then added his 41st from a long ball to put Emmanuel in front shortly before half time, but not before the opposition's number 3 got lucky in only receiving a yellow card for a stamp on Andy Marlow.

In the second half there weren't many chances, but Ditton Athletic had a player sent off as their big central defender picked up two bookings in ten minutes.

The game ended 2-1, manager Paul Waddell and skipper Rob Jackson lifted the trophy, Chris Gilbert, Rob's central defensive partner won Man of the Match and the awards were presented by the local bishop and Dennis Bailey, a former Crystal Palace footballer who once scored a hat-trick at Old Trafford. There can't be many Crystal Palace players who have done that!