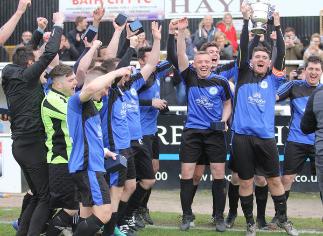 The first of three finals took place on Sunday with Farrington Albion facing Lansdown in the Secretary’s Cup at Twerton Park.

With little to separate the clubs in the Division Three table, and two 2-2 draws in the league meetings, it promised to be a close contest.

Lansdown started brightly with Alex Chapman having an early effort ruled out for offside. He wasn’t to be denied again, though. On 18 minutes, Jack Killah’s splendid cross picked out the forward, who powerfully headed past the helpless Mark Batchelar from close range.

Chapman could have had a second two minutes later. Marcus O’Shea was upended in the box by Leon Rigby’s clumsy challenge, but the leading marksman saw his weak penalty blocked by the legs of Batchelar.

Nick Johnson headed wide in a rare opening for Albion, who struggled to make inroads. Their task was made more difficult five minutes before the break when Rich Evans’ hooked ball forward saw Jack Smyth react the quickest, his brave header beating the advanced Batchelar, who was only able to watch it trickle over the line.

Farrington changed their shape at the break, reverting to a back four, and they pulled one back on 50 minutes when Corey Rawlings burst clear from a diagonal ball and coolly rolled it past Matt Britton.

He skewed wide from a similar opening, but their attacks were often blunted by poor crossing in the final third. Instead, Lansdown could have extended their lead, Batchelar performing heroics and Kit Barnes also being narrowly close twice, his second effort from thirty yards grazing the top of the bar.

Andy Howard’s men had to endure a few scares with Batchelar’s free-kick from distance almost bamboozling his opposite number, who saw it bounce inches wide. Substitute Ricky Jenkins also had a thumping header batted onto the bar by Britton, before it was hacked to safety.

That was as close as Farrington got. It’s Lansdown’s first silverware and few could debate that their performance didn’t warrant it. The 100-strong crowd applauded their efforts.

The SECRETARY'S KO UP FINAL BETWEEN FC TRINITY AND THE GRIFFIN FC WILL TAKE PLACE MONDAY 9 MAY 2022 KO 7.30 PM AT TWERTON PARK, BATH