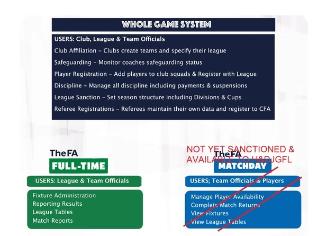 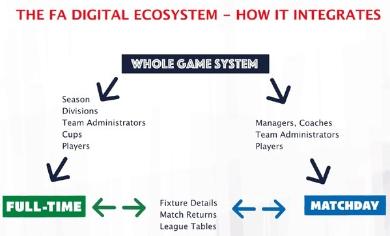 This Season the FA have launched a new Feature in that Team Administrators in FA FT are automatically downloaded from the Team Managers details set up by Clubs in Whole Game System.

Clubs Must be create these roles in WGS. The League cannot deal..

Within Whole Game System, by default, when a club allocates a role of Team Manager (including Assistant) or Team Coach (including Assistant ) this will also create them a role of Team Administrator within Full-Time.
It is important to note that their email address (if used in Full-Time, either for automated emails or for logging in) and phone number (if used for SMS) will also be automatically created from their FAN record, so any updates need to be made to the FAN record in WGS.
If a team administrator role in Full-Time is required for an individual who is not the coach or manager (for example a club secretary who reports scores and results) then they will need to be given the role of Team Secretary within Whole Game System, which will create a Team Administrator role in Full-Time (but does not give them access to Match Day). This can be done in WGS via the Team Officials page once affiliation is complete, and the details will automatically integrate into Full-Time with the role of Team Administrator.
There is no limit to the number of Team Secretaries that can be added to a team.
If any details need to be updated, e.g. e-mail or mobile number, then the individual can update their own details via WGS Portal, through FA.com, or they can be updated by the Club Secretary, Chairman or Welfare Officer via the Safeguarding icon.