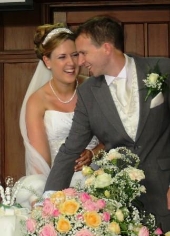 No not the first Championship game of the new season, but the marriage of Assistant League Secretary Sam Oliver to Donna at Christ Church Beckenham.

Both Sam and his brother and best man James Wickham are of course former Club Secretaries of Christ Church Beckenham FC.

The Bromley & Croydon Christian Football League fraternity, past and present, was also well represented with Sam's brothers-in law, Jack Ellis and Steve Ford, having played regularly for Christ Church Beckenham and Christ Central FC respectively. James and Steve were among the ushers, with Steve doubling up by playing bass in the band led by Christ Central's current team manager, Max Eaton, with Jack Lee on percussion.

Even the officiating minister, Andrew Towner, confessed to having a weakness for football. Both he and Sam are apparently long-suffering fans of Nottingham Forest, bless them!

Best wishes to Sam And Donna for a long and happy future together.